What is a Jaundice? Types, Causes of Jaundice

Unnatural/Abnormal yellow discoloration of the skin, mucous membranes associated increase level of bilirubin in the blood is known as Jaundice. Basically jaundice is an example of hidden disease activity. When the lifespan of red blood cells (RBCs) ends, as result of the naturally break down and destruction of RBCs bilirubin is produced. Normal range of bilirubin in human plasma is about 22mmol/L.

There are 3 Major causes of increase Level of Bilirubin in our Blood which are following:

It may lead to raise the excretory capacity/volume of the liver. For example in (Systemic Hemolytic Jaundice).

2.  Excretory Process in the Liver or Inhibition Mechanism of Conjugation

The capacity of liver’s to metabolize normal bilirubin synthesis is decreased. For example in (Hepato-Cellular Jaundice).

This process prevent/shut out the out flowing of bile.

This type of jaundice most commonly due to raised destruction of RBCs which may be both precursors and mature cells. Raised level of destruction of mature RBCs can lead to hemolysis which have sequel effect of blood utilization/avail after soft tissue injuries or internal bleeding. In some cases like; Ineffective/inadequate hematopoiesis take place in Pernicious Anaemia which is disorganized maturation of RBCs or Thalassaemia.

In Haemolytic Jaundice (Hyper-Bilirubinemia) accumulation/collection of Un-Conjugated Bilirubin which is not excreted by kidney. This process raise the rate of bilirubin from liver to intestine. Uro-bilinogen is made by bacterial action on bilirubin in the intestine. About 50% Uro-bilinogen reabsorb and taken up via portal vein to the liver and excreted by urine.

The movement of bilirubin to the liver will not increase, if hyper-bilirubinemia is occur due to the disturbance of conjugation. As a result, Uro-bilinogen in the urine is not raised and Bilirubin-uria is absent. The return/uptake of bilirubin is greatly decreased if there is general dys-function of the liver. Hence, the kidneys start excreted more amount. Serum bilirubin may be equally conjugated and unconjugated, because of imperfect Glucuronyl transferase (UDP) and intra-cellular transportation of bilirubin.

If the amount of conjugation raises the excretory volume, blood levels of conjugated bilirubin increases, and it may be excreted by urinary tract. This is occasionally occurs through restoration subsequently viral hepatitis.

Cholestatic jaundice is occurs as a result of obstruction or a depletion of bile from the liver cells into the duodenum which is part of small intestine. It might be triggered by injuries in the liver (Intra-hepatic cholestasis). Intra- and extra hepatic cholestasis can be differentiated by ultrasound or biopsy of the liver; evaluative tests of liver function do not help. Intra-hepatic cholestasis is frequently occurs as a result of general hepato-cellular dysfunction, for example, in case of hepatitis or cirrhosis of the liver. This situation is also a symbol of foremost biliary cirrhosis.

The subdivisions of biliary tree might be obstructed because of malignancies. Some medications such as anabolic steroids, phenothiazine, and sulfonylurea may lead to intrahepatic cholestasis. Extra hepatic obstruction is often the result of large biliary tract tumors, tumors of the

head of the pancreas and lymph nodes at the portal hepatic. Blockage of bile ducts may be cause because of stones in gall bladder or might be due to sclerosing cholangitis. Jaundice is triggered due to disruption of excretion of conjugated bilirubin and its increase, which is clean by the glomerulus which part of kidney and excreted through the urinary tract. Though, bilirubin could not be spotted in the urine, probably due to variations in the progressions of conjugation which is furthermore lead to development of less soluble bilirubin bound to albumin.

Fully blockage, bilirubin may not be reach to small intestine, Uro-bilinogen is not made or spotted in the urine specimen, and stool specimen might has colorless/white coloring. Bilirubin and his elements in the liver, intestine, kidney and blood. Free bilirubin which is known as (indirect) and bound which called as conjugated (direct) bilirubin. Bilirubin toxicity. Bilirubin is formed from the breakdown of hemoglobin in the cells of the reticulo-endothelial system (RES), it is particularly active in the spleen and hepatic Kupffer cells. In a day 250 to 350 mg of bilirubin is made in an adult person.

A portion of Uro-bilinogen immersed in the intestine and go in the portal vein to the liver for one time more, where it is oxidized into bi-pyrrole. In the large intestine, bile bilirubin converted into sterco-bilinogen beneath the influence of typical intestinal flora. In the inferior part of the colon, colorless/pale sterco-bilinogen is oxidized into brown chocolate color sterco-bilinogen, and is expelled through feces. A minor portion of sterco-bilinogen immersed in the blood and through the Hemorrhoidal Veins and Inferior Vena Cava go in the kidneys and then in the urine. Normal urine comprises a slight volume of conjugated bilirubin which is about 7 to 20 mg /L which is not measureable by qualitative approaches.

Hemoglobin is present in RBCs which is breakdown into bile pigment, and other byproducts like porphyrin expelled in the bile, stool and urine. Its large part is made during the catabolism of hemoglobin. Bile pigments are mixtures which are consisting of 4 pyrrole clusters which is further connected by 1 carbon bond. As a consequence of a-methine bond of haem interruption in hemoglobin, verdo-globin (hole-globin) is made, that is an iron porphyrin pyrrole complexes with an undeveloped arrangement, of green/lime color. Later discharge/release of globin and some iron via the particle of verdo-globin, green/lime bile pigment biliverdin is formed.

An unconventional system of biliverdin creation is cleavage of the protein which is portion of hemoglobin.  The cells of the mono-nuclear phagocytic scheme, biliverdin is decreased to bilirubin, which is brought in the liver through blood. A little quantity of bilirubin is made in the cells of the mono-nuclear phagocytic scheme of the haem which is not use for the production of hemoglobin. Bilirubin has the major and supreme diagnostically valued. Biliverdin is existing in the bile in minute quantity about 15 to 20% in dry weight. Inside the liver, bilirubin make sets of complexes, or conjugates, mostly by glucuronic acid, and less extent with sulfuric acid. In Human body around 300mg of bilirubin is formed in the human bod and around 75% of bilirubin is made from bilirubin glucuronide, and roughly 15% through bilirubin sulfate.

RSS Error: A feed could not be found at `https://www.labtestsguide.com/category/conditions/feed`; the status code is `403` and content-type is `text/html; charset=UTF-8`
Possible References Used 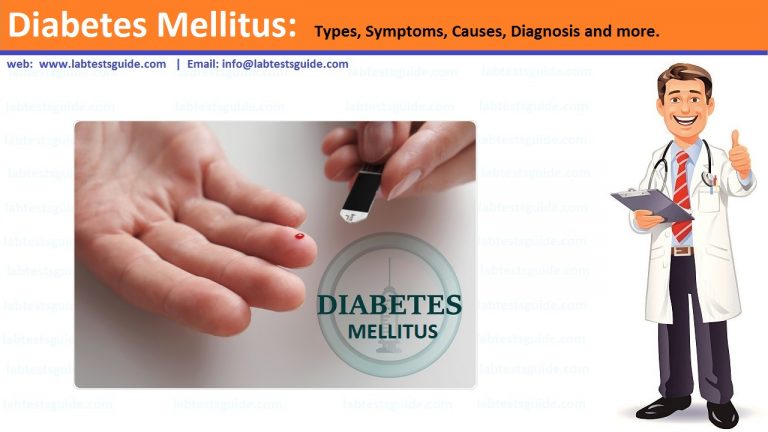